Ancient city of Aetolia in Evinos river near the Corinthian Gulf. Its founder, according to legend was Kalydon, son of Aetolia and Welfare. The Calydon played an important role in the Aetolian confederacy and enjoyed its heyday in the 2nd century BC In Calydon sent the goddess Artemis kalydonio Capri, the famous wild boar, to avenge the disrespect of the king Oineas.

Located between Missolonghi and Etolikou on the slopes of Mount Arakynthos. Two low hills Petrovouni and Gyftokastro retain remnants of an ancient wall. Impressive are the monuments of the new Plevrona, ranging from the highway to the summit, where the citadel, known as Castle Mama Rene. The wall of Plevrona had 7 gates and 36 towers, and near the west gate are the remains of buildings and a small theater with wonderful views.

Ancient city of Acarnania to the west of the mouth of the Achelous in ochyrotati position. Reported by Thucydides that during the struggle the Athenians and Peloponnesians were allies of the Corinthians, so it was besieged by Pericles, but without success. General Phormio forced her to join the alliance of Athens in 428 BC, 331p.Ch. conquered by the Aetolians and released 313p.Ch. Cassander. With the invasion of the Romans, the city was handed back to Acarnanians. Today there are remnants of the city in a position Trikardokastro. During the summer held the "Festival Oiniades" under which presents several theatrical performances and concerts. 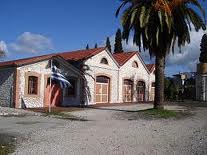 The old railway station has now been renovated and configured properly for hosting events. The same site are and cinema from the association Friends of Film Missolonghi.

The museum is housed in a two-storey neoclassical building of 1931. The museum's collection includes original paintings and copies of scenes of Exodus Mesologi, portraits philhellenes and Greek chieftains, authentic 1837 prints of Friedel, 1826 guns, coins and medals, plaster busts of five Mesologi Premiers. Still be exposed objects and manuscripts of Lord Byron, surrounded by pictures of his two trips to Greece and the embryo from the marble statue, located in Cambridge. Some of the most important exhibits are: I. Vryzakis, the output of Missolonghi. "The building was previously used to house the Town Hall.

Center for Art and Literature "DIEXODOS"

The vent is located downtown, on a pedestrian street, in a two-storey 18th century building, total area 400sq.m, renovated in 1999. In this he was born in 1798 and lived elected by the militants of Missolonghi overall leader, General Athanasios Kotsikas-Razi. Includes a ground-floor multipurpose room 180t.m., a room 80sq.m. the first floor and a terrace first floor is also 110sq.m, which can be used for speech events, art and film projection with 110 seats or 150 people for banquets

The building was constructed on the Gallery in 1835, renovated in the most katalllilo way. The work funded entirely by the family Moschandreou without subsidies and without any aid. The agency covers the application of concepts of the founders of the nonprofit. The Gallery Christos and Sophia are Moschandreou Museum contains paintings, prints and sculptures by Greek artists of the 20th century. The Gallery is open everyday (except Mondays) 11:00 a.m. to 1.00 pm