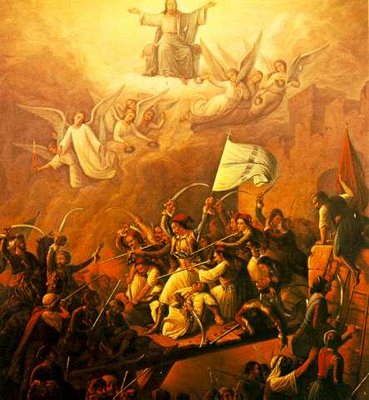 Important role played Missolonghi during the liberation struggle of the Greeks. After the battle of Peta, the Turks went to Missolonghi whose strategic location controlling the Peloponnese for who conquered. The first serious threat came on July 20, 1822 from the sea, when she joined Turkish and Egyptian army under the command of Hassan Pasha, with 84 boats. After the first failed attack the Greeks begin negotiations with a mediator Varnakiotis (who then said "bowed" the Turks) by Omer embryos. The city was protected by the "fence" the earthen mound was built by A. Razikotsikas and the outer side of a trench width of 2m., Depth 1.20 m and a length of 1600 m along the fence paratachtikan 350 men from Missolonghi and 500 Etoliko. On the wall there were still 14 and 2 Turkish cannons were taken and gunpowder for a month.
On October 21 arrive in the city Kitsos Tzavelas and Botsaris with a few men and a meeting followed by Mavrokordato decide 'fight to the bitter end. "The failure of the Turkish attack of 11,000 men was followed by negotiations that gave valuable time to Mesologi to organize their defense and Hydra to prevent sending 8 November seven boats to assist in Missolonghi.
The Turks designated the attack on Christmas Day of 1822 in order to find the Greeks unprepared because of the celebration. On the eve of the attack, Constantine Gounaris from Ioannina, a Greek secretary Omer Vrioni, whose wife and children were hostages of the Turks in Arta, betrayed the plan to the Greeks so when attacked by the Turks found men and women in each bastion to resist heroically. Thus the Greeks got the win, while Gounaris after the massacre of his family to the monastery of kalogerepse Kleisoura.
In the intervening years between the two sieges, organized the city's fortifications with large open pits, which was the Italian engineer Peter philhellene red, with 48 cannons. Having an ultimatum to Sultan Kioutahis with 35,000 army camp outside Missolonghi end of April 1825. In Missolonghi were about 4,500 Greek soldiers. At sea, the fleet of Mahmud Pasha patrols and supplying the Turks with food and ammunition continuously. In June Kioutahis commanding general attack which contradicted with passion. Seeing the heroic resistance Kioutahis attempt negotiations to achieve the Treaty, which the Greeks refuse. The siege continues and the Greeks, though without food and ammunition, continue to resist and cause the anger of the Sultan who threatens to "get his head if it falls Missolonghi."
In December 1825 Ibrahim Pasha besieges Missolonghi, after it fails, seek the cooperation of Kioutachis. The situation for the Greeks no commissions are increasingly desperate as famine and disease is now a fact. Miaoulis is unable to supply fighters and so decided the Exodus on the night of April 10, 1826.
Constructed three movable bridges erected in as many places. These shared people who will exit, while the powerless with those who chose to die near them, occupied buildings with stronger ammunition to fight to the bitter end. Before the Exodus metalamvanoun of Holy Communion and burn everything unnecessary. Shortly before, however, perceived betrayal of the project to Ibrahim by someone, possibly Turkish, from the Body of chieftain Disc Navigator. Although modifying the plan, confusion, panic at the time of the Exodus and the Turkish fire causing huge losses. Support is expected to St. Symio of his fighters Karaiskaki, there came a sudden replacement led forces in Central Greece.
Once 1,300 fighters managed to reach Amfissa and decimated the women. Those who failed to emerge, led by Christos Kapsalis ignited and blew up the powder keg. The Bishop Joseph Rogon after tough resistance for two days and nights in the windmill, set fire to the last barrel with ammunition completing resplendent on April 12, 1826, the Epic of Exodus.
Τα ιστορικά κείμενα και οι φωτογραφίες ειναι κυριότητα του www.mesologi.net
FaLang translation system by Faboba